It shows a young girl engaged in her favorite pastime: Reading. Nestled in her lap is her favorite teddy bear, and looking over her shoulder is Cinderella, the family's yellow Labrador retriever.

Linda Stauffer of Haycock Township said the work is a love letter to her daughter Katie, an avid reader who was valedictorian of Quakertown Community High School's Class of 2001.

Katie was a pre-med student at Swarthmore College in Delaware County when she was killed in a car crash in Georgia while on the way to Florida on March 8, 2003.

Stauffer, a retired art teacher from the Easton School District, said she deals with her loss by helping children explore their own creativity and looking for ways to inspire them.

On Friday, she presented the statue to Richland Elementary School, where it will be on display inside the school library, according to school principal, Kathy Winters.

Stauffer spoke to students at an assembly, telling them about the statue and how it was made. She also spoke about how much her daughter still means to her.

"Katie was known as the girl with a book. She would read about 30 books a week," Stauffer said, fighting back tears.

Fifth grader Abbie Dickson, 11, of Richland Township, said she liked the statue and was thankful for the gift.

"It will be a reminder to us to work hard and keep reading, when we see it in the library," Abbie explained.

Stauffer began her quest to create a legacy for Katie in 2004 when she founded the Katie Stauffer Memorial Arts and Culture Center.

Stauffer raised money and developed art classes in Quakertown Borough and in Richlandtown, before landing a permanent spot in 2009 at the Upper Bucks YMCA in Richland Township.

"It's been a great fit," Stauffer said of the partnership with the YMCA.

YMCA Executive Director Pat Edwards said her organization handles the business side of running the center, freeing Stauffer to focus on workshop content and recruiting instructors.

"It's a benefit to the community for us to be able to offer arts education courses, so children who are not involved in sports here have a place to use their creativity," Edwards said.

From scrapbook making to art studio time and beginning music and movement for children as young a 6 months, Stauffer said the YMCA programs have allowed her to focus on what she does best.

On Friday, as she spoke to Richland students, Stauffer relaxed and even read a story from one of Katie's third grade composition books.

"I'm just doing everything I can to keep her memory alive," Stauffer said. 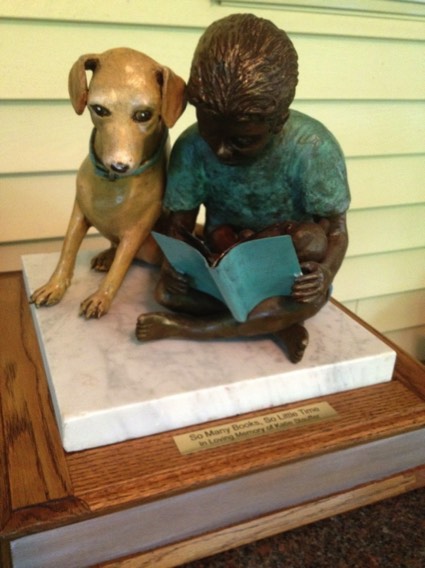